The charming city of Ojai is about a 30 minute drive to the coast, which means that visiting the beach is an easy day trip. From Ojai, you can travel south on CA-33 towards Ventura, which only takes about 20 minutes. Or you can travel west on CA-150  towards Carpinteria & Santa Barbara, which take just over 30 minutes. Either way, you have some amazing beaches to choose from. Here is our list of the 8 best beaches near Ojai. San Buenaventura State Beach is a 30 minute drive from Ojai.  This beach runs along the Ventura waterfront, but isn’t as busy as nearby Ventura Pier Beach. Ventura Pier is the main central beach of Ventura and is about 26 minutes from Ojai. Come hear if you want to be near restaurants, shops, and if you want to visit the beautiful and historic San Buenaventura City Pier. Surfers Point Beach at Seaside Park is the closest beach to Ojai, only 15 miles away, which takes about 25 minutes. Come here if you want to surf, kiteboard, or simply to watch them. Emma Wood State Beach is about 25 minute drive from Ojai. Come here if you want park facilities, such as picnic tables and hiking trails. Camping is allowed and if you have an RV, you can set up on the North Beach.

Located near Carpinteria, Rincon County Park Beach is on the north side of Rincon Point. It is just over a 30 minute drive. Come here for the amazing views, beachcombing and to picnic. 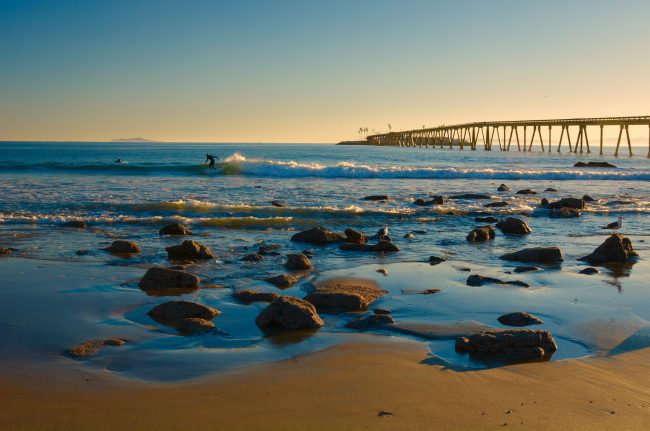 Mussel Shoals Beach is nestled next to the tiny community of Mussel Shoals (not to be confused with famed Muscle Shoals in Alabama!). This beach is a 35 minute drive from Ojai. Come here to stay away from the crowds, or to eat at the Shoals Restaurant, which is part of the Cliff House Inn. The Carpinteria Seal Sanctuary is a harbor seal rookery. As expected, the beach is off-limits, but it is a great place to watch the seals. The drive here is 34 minutes from Ojai. Carpinteria City Beach starts where Linden Avenue (the main drag in Carpinteria) ends at the ocean. It is a 40 minute drive from Ojai. Come here to sunbathe, play on the beach, swim in the ocean, and if you want amenities like lifeguards, restrooms, picnic tables and showers.

Related: Things to do in Ojai