Bixby Bridge – See the photographs below of the famous bridges.

California has some of the most iconic bridges around. Today we take most of them for granted as we drive over them, but back when many were being constructed in the early 20th century they were changing the economic engine of California as the West Coast population was exploding. It is hard to downplay their value when you think about how much time it would take to drive around something like San Francisco Bay when trying to reach Marin County just minutes away from San Francisco. The mountain passes and coastal highways all transport people and goods saving time and money constantly. Unfortunately many of these famous bridges are aging and in need of repair or even replacement.

These picturesque bridges come in all shapes, sizes, and designs. Some are suspension bridges, others are more typical arch bridges or beam bridges, and then there are rare bridges like the covered bridge in Felton and the wooden trestle and deck truss bridge over the Albion River. This trestle bridge is probably next to be replaced as it’s the last wooden bridge on Highway 1.

The Golden Gate Bridge might be the most photographed bridge in the country. This 1.7 mile long bridge was completed in 1937 and is suspended by two huge towers with a 4200 foot main span – a record that stood for nearly 3 decades. It is considered a wonder of the modern world by civil engineers. Nearby is the San Francisco-Oakland Bay Bridge which is also a suspension bridge, but gets far less respect from engineers (and photographers).

Then there are the historic bridges along the coast on Highway 1 including well-known spans such as Bixby Bridge, Rocky Creek Bridge, and Big Creek Bridge all in close proximity along the Big Sur Coast. These arch and double arch bridges frequently grace postcards and calendars. There are many other important and attractive bridges in our state. Here are pictures the best bridges on or near the coast in California. There are many ways to photograph the Golden Gate Bridge

The Bay Bridge deserves to be photographed more often! 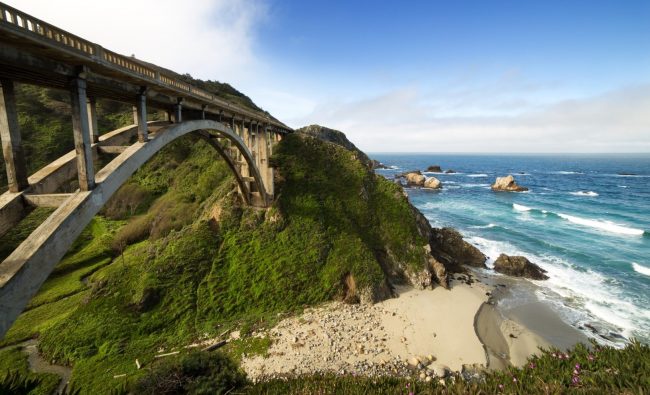 The beach under Bixby Bridge is inaccessible though beautiful A vital connection between San Diego and Coronado This unique bridge deserves a spot on this list A unique bridge between Loleta and Ferndale near the coast, (photo wikipedia) 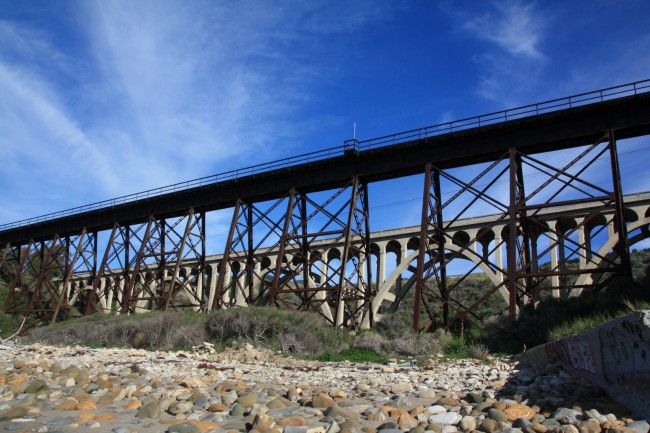 You can’t drive to it, but you can hike and bungee jump here!