Not only is Manhattan Beach one of the most visually stunning beaches in Southern California, but it’s the home of the AVP Manhattan Beach Open. Walk to the end of the pier and you’ll notice all the plaques with the names of former winners. If you’re in need of some help to step up your game, the local Parks & Rec department offers beach volleyball lessons. If you approach the Ocean Beach volleyball courts, be prepared to walk right into a match. The area is usually crawling with both experienced players and volleyball novices, so you won’t have to worry if you’re not an expert. It’s all about having fun and enjoying yourself at Ocean Beach. If you’re hoping to score a tournament-grade court for your group here, make sure you early—before 9 AM is best on a weekend. If you’re more of a beginner, the courts to the south might be more your speed. The sand is deep at Hermosa Beach, so if you can hop here, you can hop anywhere. Playa Del Rey is the halfway point for volleyball pros traveling from Malibu to meet their counterparts from Orange County. It’s isolated, but it gets busy. You can enjoy the view of boats moving in and out of the marina while you play. Sorrento Beach is located about 1.2 miles north of the Santa Monica Pier. It’s long been the gathering spot for many volleyball players, both beginners and the more advanced teams. Five-time Manhattan Beach Open Champion Jim Menges got his start there.

The Oceanside Beach Volleyball Club has a program for young volleyball players to improve their skills and compete locally. For everyone else, the beach has plenty of open space to set up a net.

Sunset Beach is a seaside mile-long beach community in Orange County. Bordered by hotels and multi million dollar homes, it’s the perfect destination for anyone who wants a true beach vacation. There are great sand volleyball courts available for public use. Long Beach ranks as having the best parks system in the country. And the beach must be inviting to volleyball players considering one of the world’s top athletes, Misty May Treanor, lived there for years. There several beaches with sand volleyball courts to choose from, including Alamitos Beach and Belmont Shore Beach. Oxnard’s Hollywood Beach was once a place where celebrities of the Golden Age of Film would go to escape the chaos of film sets. These days, it’s the perfect place to play a relaxing beach volleyball match. 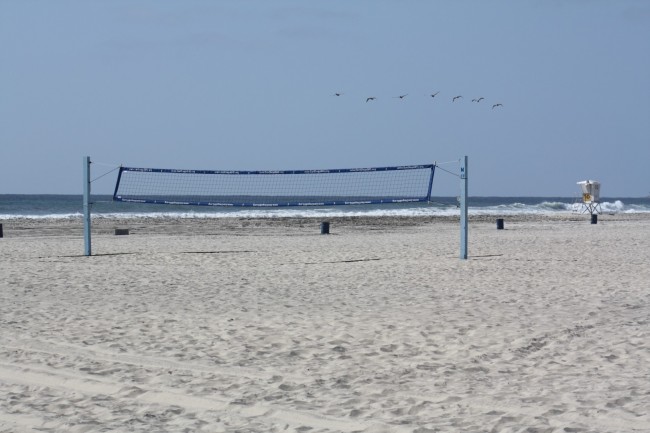 Centrally located Mission Beach is a classic gathering place for tourists and locals alike. Their sand courts are available for public use, though you’ll have to get there at just the right time to secure one. Most courts are located at the south end of the peninsula at South Mission Beach.