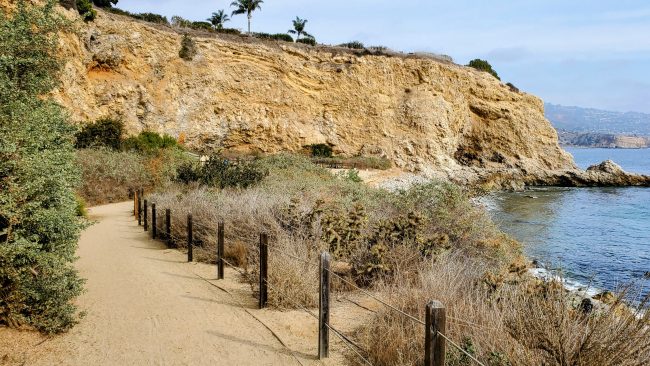 Long Point is the huge property where the Terranea Resort is located in Rancho Palos Verdes, CA. This site has a lot of history as it was the home of Marineland, one of the first theme parks in California that opened in 1954. Marineland shut down in 1987 and the point was vacant for many years before the Terranea luxury eco resort was completed in 2009.

Luckily for all of us, the trails and beaches at Terranea are open to the public. A dirt path called the Bluff Trail follows the bluff’s edge around the perimeter of the resort. At the southern point this trail provides access to a rocky shoreline, but the best beach access point is east of there.

Terranea has turned an old road into a trail that drops down to a cliff-lined cove dubbed Terranea Cove Beach. Unfortunately the shore is rocky and not great for sunbathing, but listen for a soothing sound that comes from the smooth rocks as they roll around in the surf.

The resort has provided a landing for their guests to use, but the general public can’t camp out there.

The real highlight of this beach is the large sea cave that is accessible at low tide just over the rocks at the east end of the beach. Be careful if you decide to climb over to see the cave.

Parking for the general public is provided in a signed lot located at the first left on Terranea Way. From there it’s an easy walk down to Terranea Cove Beach.

Several restaurants at the resort are open to the public. Nelson’s is a superb place during the day to get food and a brew while looking out over the ocean.