Have you ever explored a cave? It can be both fascinating and educational, especially at the hidden sea caves of Southern California. There are quite a few naturally-created sea caves in the area, and each is a little different. Some are a bit more off the beaten path, so see our beach pages to find their location. Most are not so deep that you need a head lamp, but bring your phone for photos and use the flashlight if necessary. Beach caves are cool, literally, and are a refreshing place to get out of the sun.

Don’t forget to check tide charts as many of these are only accessible at lower tides. 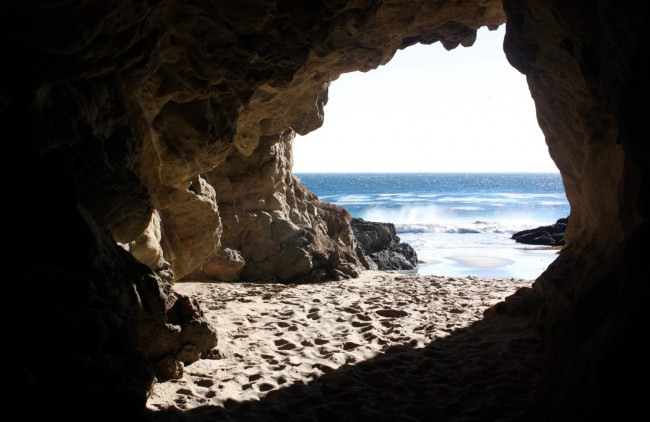 Leo Carrillo State Park is a beautiful spot, and it’s full of small sea caves and rock arches that are both fun and safe to explore. They are located in a rocky point with a lifeguard tower on top that separates the South Beach from the North Beach. These caves are best seen during low tide. The cave here is hidden and a little mysterious, but it’s worth looking for. When you get to Cabrillo National Monument, take the Tidepool and Bluff Trail north until you reach a long set of stairs. You’ll walk along the edge of the cliff to reach the cave, which is intimidating, but it’s wide enough for one person at a time to walk on. At the end of the unofficial trail, you’ll come to the beautiful cave opening. It’s a large round hole in the bluff where you can look down into the cave. Getting into the bottom of the cave is only possible at low tide and can dangerous even then. Note the National Park Service website now says this cave is in a part of the park that is closed – darn! Located in the beautiful Crystal Cove State Park, this cave can be found at Treasure Cove and is accessible only during low tide. Luckily many of the tide pools at Crystal Cove are near the cave and also exposed at low tide. Sunny Jim Cave is the largest sea cave in La Jolla, and it’s also the easiest to find. That’s because it’s surrounded by The Cave Store, which charges a small admission fee to see it. But considering the path to the cave is paved, illuminated and safe, it’s totally worth it, especially if you’re a beginner or a bit scared of dark mysterious spaces. More adventurous folks can see other caves from the water by taking a guided kayaking tour from La Jolla Shores Beach. At low tide it’s possible to walk to La Jolla Shores to La Jolla Caves Beach a spot known for caves and tidepools. El Matador Beach has more rock arches and sea caves than any beach in Southern California. Explore around and you’ll keep finding more. The Painted Cave on Santa Cruz Island requires taking a boat trip from the mainland to Santa Rosa Island in the Channel Islands. If the weather permits and seas are calm enough, the captain of your tour boat will pull in close enough to see this colorful cave on the return trip to the ferry dock in Ventura. Island Packers is the official tour company for Channel Islands National Park. To find this hidden cave you’ll need to park in one of the public lots located on the Terranea Resort property. Then hike down to their small private beach (this shoreline access is open to the public). The cave is hidden around a rock wall on the south side of the beach. This cave in Laguna Beach might be the most impressive on the list. You’ll find it at the south end of Thousand Steps Beach, a beautiful sandy beach that requires going down a long set of stairs. A bonus with this beach is the rock arch at the north end of the beach that leads to a hidden beach on the other side. Be sure to visit at low tide so you can see both natural features. Cave Landing in Avila Beach is the site of many sea caves, rock arches, and even a old man-made tunnel that leads to a spectacular viewpoint. Accessing the sea caves requires climbing down a steep cliff using a fixed rope and then traversing another ledge. It’s not for the meek. The tunnel (signed as a cave) is equally impressive and is safe to access from the trail that leads down towards Pirate’s Cove Nude Beach (go left to the beach and right to the tunnel). Cave Landing is one of the most difficult beaches to reach in California.

This cave like the others is best at low tide. You start at Dana Point Headlands Beach and walk around the end of the point looking for a small slot in the rocks. This is the back door to the cave which has a larger opening lower in the water. The path to get to this cave is quite rocky so bring good shoes.

If you visit Little Corona del Mar and walk south during low tide to see the many tide pools, you will discover several caves in the bluff too. Keep going around the bend towards Cameo Shores Beach and you’ll find even more on the way. Arch Rock is an added bonus for this scenic walk. Just bring sturdy shoes as the rocks here are sharp.

Other beaches with caves

Another one that requires a rare minus tide is the collapsed sea cave at No Surf Beach in San Diego’s Sunset Cliffs Neighborhood. Just google “Sunset Cliffs Sea Cave” and you’ll find incredible professional photos of this cave.