California’s Pacific coastline doesn’t just have beautiful views – it’s dotted with creepy places that are said to be haunted. There has been inexplicable activity reported everywhere from lighthouses to historic buildings that were once the scene of violent crimes. These are just thirteen of the many places rumored to have old spirits lingering. Some of them you can still visit and dine at, while others are off-limits to the public entirely. For almost 30 years this island off-shore from San Francisco locked up some of the country’s most violent criminals. Alcatraz put away infamous felons like Al Capone and Alvin Karpis in a damp, often fogged-in facility, as far away from the public as possible. It closed by 1963 but is still recognized as one of the most haunted places in the country. Ghosts still linger among the empty prison cells, and there have been several reports of strange noises like slamming doors and unexplained footsteps. The RMS Queen Mary, now docked in Long Beach Harbor, was bigger and faster than Titanic. It was retired from sailing seas in ’67, and established as a floating hotel, museum, theater and event venue.

But during its time as a vessel, there were several deaths from various causes – like a chef who was shoved into an oven after cooking a bad meal – a crewman who was crushed to death from a heavy door – and several people (both adults and children) who drowned in the first & second class swimming pools. Because of the ship’s long storied past, experts believe that over 150 known spirits are still lurking the hallways. The most haunted room, B340 has had so much paranormal activity that they don’t even rent it out anymore. Photo by Eugene Zeleko on Wikipedia

Rispin Mansion was built as a grand show place to draw interest to Capitola, just outside of Santa Cruz, but this 22-room property never got the attention it deserved. William Allen Rispin, the owner, never attended to the water & sewage systems and let the investment slowly degrade over time. He eventually sold it to a business partner, who also left it neglected.

It was then sold and used as a nun convent until 1957, but they later moved because it was too cold. During the ’70s the empty grounds were used as living quarters by squatters, and by the ’80s ghost stories started to surface. The mansion’s now been abandoned for some time but it’s still eerie to visit. Locals have reported stories like hearing eerie whispers to seeing things out the corner of their eye. Fresh seafood and ocean views aren’t the only draws of Moss Beach Distillery. This restaurant perched on a cliff is also haunted by the famous “Blue Lady” ghost. Back during Prohibition, the building served as a speakeasy, like many places on the San Mateo Coast. It became known as Frank’s Place, and a popular spot for silent film stars, writers, politicians and others looking for a drink at night – including a young woman often dressed in blue, with a man who she was having an affair with.

But one day, she was reportedly murdered here while walking on the beach with him. The man was assaulted as well, but survived. Her spirit is still thought to hang around the building, looking for her lover and to relive the old speakeasy days. Since the time of her death, all kinds of strange events have happened that cannot be explained. People have reported seeing checkbooks levitate and even young children have seen apparitions. In fact, Blue Lady was even featured in an episode of Unsolved Mysteries. In 1942 this theater first opened its doors as one of the only places in the country where you could still watch old silent films in the theater (the way they were meant to be seen). The original owner, John Hampton, used to soak his films in toxic chemicals in a bathtub above the theater to keep them preserved, which was later attributed to the cause of his cancer. His mentee Lawrence Austin took over after he died.

But one night in 1997, with visitors in the theater watching a movie, a hitman came in the lobby and shot Austin, killing him. It turned out to be a murder-for-hire by the theater projectionist (and Austin’s lover) James Van Sickle, who is now – along with the hitman – serving life in prison. Some people say you can still see Austin’s ghost lurking around the lobby, and the original owner’s ghost on the second floor, where he lived. Overlooking the Central Coast in Carmel, Tor House and its neighboring stone tower are hauntingly beautiful. The home was built over a century ago for poet Robinson Jeffers and his family. Robinson and a developer constructed the cottage in 1919, and later the 2-story Hawk Tower by 1924.

What makes it so haunted? Well, the writer predicted in his poem “Ghost” that after he passed away he would long haunt this home that he built. The show Ghost Adventures investigated the structures further and found their own signs of activity. Not only did they pick up signals on their devices but they found strange evidence from an inkblot test. The ghost hunters tried dropping a dollop of ink on paper where Jeffers used to spend hours writing his poems, and watched as it formed into a small devil figure with horns. (Check it out in this short clip from the Travel Channel.)

Tours are offered hourly from 10am-3pm, but they’re limited to only six people, and reservations are required. You can find more info on their website here. 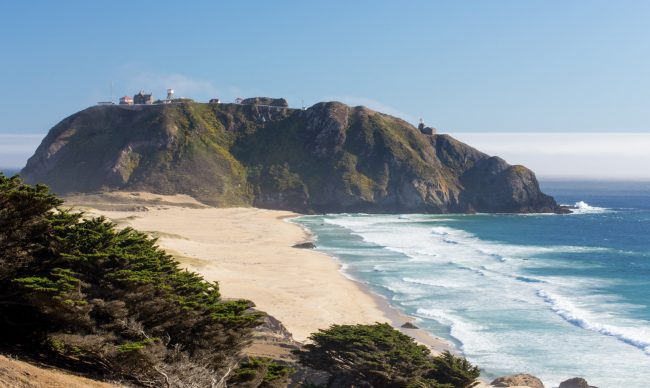 Sitting on top of a rock along the Big Sur coast, Point Sur Light Station is considered one of the most haunted lighthouses in the country (and it was featured in a different episode of Ghost Adventures). Even with its powerful beam the lighthouse has seen its share of shipwrecks over the years, and because of this, the spirits of those who perished still haunt the station and its surrounding buildings. Most specifically, an apparition of a tall man in blue 19th century-style clothing has been spotted around the tower.

The lighthouse is now part of Point Sur State Historic Park and open to the public for tours. For an even creepier experience, take one of their Moonlight Tours, or one of their Ghost Tours in October. In Beverly Hills, Greystone Mansion was the scene of a tragic murder/suicide in 1929. Only months after resident Ned Doheny and his family moved into the 55-room estate, Ned was killed by his secretary, Hugh Plucket. The official reports said it was because he had “gone crazy” and was mad that Ned would not give him a raise, before turning the gun on himself.

Ned’s widow Lucy later remarried, and lived in the house until 1957. Eventually she sold the grounds to Paul Troutsdale, and then it became the property of Chicago industrialist Henry Crown, who rented it out to film studios. In the ’60s, Henry was considering demolishing the mansion, but the city of Beverly Hills stopped the demolition by purchasing it in 1965. Only a few years later by ’71, it was opened as a city park and still remains open to the public. Tons of movies have been filmed here, including the 2007 film There Will Be Blood, which was loosely based on Ned’s life.

But even to this day the property is rumored to be haunted. An apparition of a man has been seen walking the hallways, making you wonder – is it Ned? Or is it Hugh Plucket? Some people also claim they’ve seen what appears to be a pool of blood in the guest room where the murder scene occurred, but all have said that as soon as they noticed the pool would disappear. It’s a strange feeling to walk through SF’s Neptune Society Columbarium. This elegant Greco-Roman-style landmark holds thousands of cremated human ashes in urns, niches and boxes in glass-fronted windows, along with old possessions to commemorate the lives of those deceased. While just the cremated remains alone will freak some people out, there’s also ghosts rumored to linger around the building as well. For instance, one woman reported feeling a hand on her back while she was touring the building, only to find a light hand print on her dark blouse after she returned home. Built in 1856, Battery Point Light has seen a lot throughout its years, including a major tsunami that destroyed much of Crescent City in 1964. The historic building sits just off-shore and can be reached by foot at low tide, though visitors should be cautious as it becomes its own tiny island when the tide is high. The last resident curators reported strange happenings while they were there – including things like their slippers at night would mysteriously turn backwards, hearing strange footsteps, and their cat acting very strangely and not willing to enter certain rooms. Dining with spirits is a delight and we’re not just talking about alcohol. In downtown Monterey, this restaurant serves farm-to-table fare and cocktails in a building that dates back to 1833. They’re known for not only having a warm, inviting ambiance – with fire-lit rooms, chandeliers, a balcony, bar and fine wood tables – but ghosts are said to lurk the place as well.

During the middle of the night people have said to have heard both footsteps and child’s cries from upstairs, even though nobody was there. Some employees have also reported that after they’ve locked up for the night, and turned off the lights, by the time they reached the parking lot the lights had all suddenly come back on. Restaurant 1833 is popular so reservations are suggested. Photo by JP Smith on Wikipedia

The old army grounds of Fort Humboldt aren’t just for history buffs. This now-state park just south of Eureka also has plenty of paranormal stories to tell. Several visitors have reported seeing the ghost of an old commander, who died of malaria in 1859, staring out the window of an old hospital building. Others have sworn they’ve heard eerie sounds of heavy objects being dragged across the ground, and have seen lights turn on & off late at night. Potter Schoolhouse just has a creepy vibe – one so eerie that it was even featured in Alfred Hitchcock’s 1963 horror “The Birds”.  Built in 1863, the building served as both the town’s schoolhouse and town center, with social events held upstairs. Almost a century later it was closed to the public, and later purchased and turned into a private residence. Ever since it has been teeming with ghost stories, including strange sounds of children playing coming from the building. The inside remains closed off to the public but visitors can still swing by to check it out from the front.

Do you believe in ghosts? Where have you experienced paranormal activity near the coast in California?