When you think of Los Angeles, “secluded” is typically the last word that comes to mind. But believe it or not, there are some beautiful beaches in the area that remain surprisingly uncrowded, at least compared to the more popular stretches of sand nearby. The next time you need to escape from LA for a little peace and quiet, head to one of these hidden beaches. You’ll find Marina Peninsula Beach south of Venice Beach near the Venice Fishing Pier. The beach here is just as beautiful as the nearby Venice beaches, but it’s significantly less crowded. Even better, there’s a parking strip along Via Marina on the north side of the harbor entrance channel, so finding a spot shouldn’t be difficult. Point Fermin Park Beach is in the San Pedro District of LA below the steep bluffs of Point Fermin Park and Lighthouse. This rocky beach is great for beachcombing and tide pools, and there are two main trails that go down to this rocky beach from the west end of the park along Paseo Del Mar. Relax in the grassy park or have a BBQ in the picnic area. If you enjoy a more active beach experience, Cabrillo Ocean Beach in San Pedro is the place to be. The beach sits next to a park with grass areas, picnic tables, a playground, volleyball courts, and a paved bike path. The beach on Cabrillo Harbor is busy with families on sunny days, but the ocean beach is pretty laid back. Located on the Pacific Coast Highway in Malibu, Big Rock Beach is narrow and rocky, disappearing during high tide. The beach is right in front of a stretch of waterfront homes, but since every California beach is public, you’re still free to enjoy it. Big Rock is just one of many hidden beaches in Malibu. Have you ever heard the term “Billionaire’s Beach?” Carbon Beach has been a hot topic in Malibu over the years, as the wealthy business tycoons and celebrities who own homes there have fought to keep the beach private. They haven’t been victorious, and in fact, a few faced heavy fines for blocking access paths on their properties. This is a beautiful place to come to relax – and admittedly, looking at all the huge homes is part of the fun. This is another Malibu gem, which you’ll find east of Point Dume in Malibu. The lack of good parking near Escondido Beach is part of the reason it stays secluded, but if you can find a spot, you’ll be treated to some peace and quiet. The best entrance for this beach is down a long public stairway just west of Geoffrey’s Malibu. Located in Palo Verdes Estates, Malaga Cove Beach is actually the south end of the long sandy shore that includes Redondo Beach and Torrance Beach. But while tourists flock to those better-known locations, this stretch of sand remains delightfully uncrowded. To access the beach, head down the Malaga Cove Trail from a parking lot at the intersection of Paseo Del Mar and Via Arroyo. Bluff Cove is also located in Palos Verdes Estates, and it’s one of the best kept surfing secrets in the area. But you certainly don’t have to be a surfer to appreciate it – beachcombing and hiking are also popular here. At low tide, you can explore the rocky shoreline for miles. 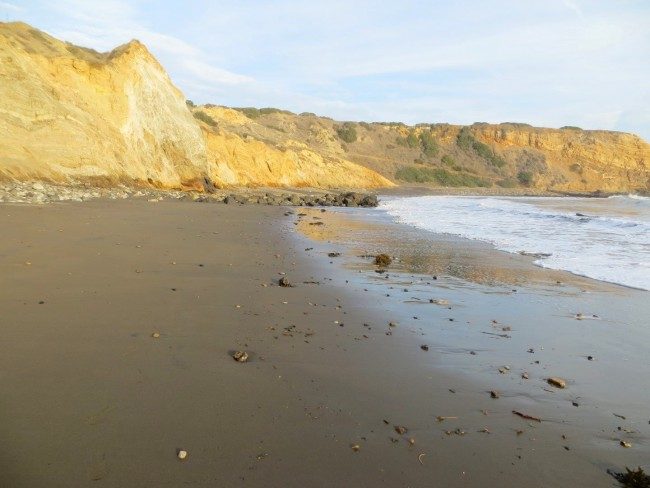 Sacred Cove Beach is located in Rancho Palos Verdes. Also referred to as Smuggler’s Cove, it’s a great place for exploring tide pools and taking scenic, secluded beach walks. The cove sits in between Portuguese Point and Inspiration Point, both of which have trails on top that offer excellent views of the Palos Verdes area.