Over years of traveling the California Coast to visit beaches, we have discovered so many amazing places and also some strange things. We wanted to share pictures and stories about these man-made curiosities. Here is our list of the top 10 strange things you’ll find at California beaches. Hidden below the bluffs in a remote section of the California Coast near La Jolla is a structure nicknamed the “Mushroom House.” This structure was built in 1965 as a guest house for a house on top of the hill. A funicular (steep tramway) connects the upper property and the Mushroom House. The unique design is claimed to be for keeping out vandals and trespassers. It is located about equidistant from Scripps Pier and the beach access at South Blacks Beach, but avoid high tide if you plan to check this place out. Tucked around the corner to the north from Victoria Beach in Laguna Beach there’s a tower that looks like it belongs on the coast of Scotland instead of Southern California. This tower, nicknamed “La Tour” (French for tower), was built in 1926 to provide a protected spiral stairway from the house on the bluff to the beach below. Like many of these strange places on the beach, you need to avoid high tide when access might be unsafe. On the shore about a half-mile north of Golden Gate Park in San Francisco you’ll find the remains of an historic bathhouse known as the Sutro Baths. The Baths were opened to the public in 1896, but eventually shuttered in the 1960s. After an arson fire in 1966 burned the buildings down the only things left were the foundations. The property is open to the public in Golden Gate National Recreation Area and footpaths lead to many nooks and crannies of the old structure and even a couple tunnels.

The Sunken City at Point Fermin 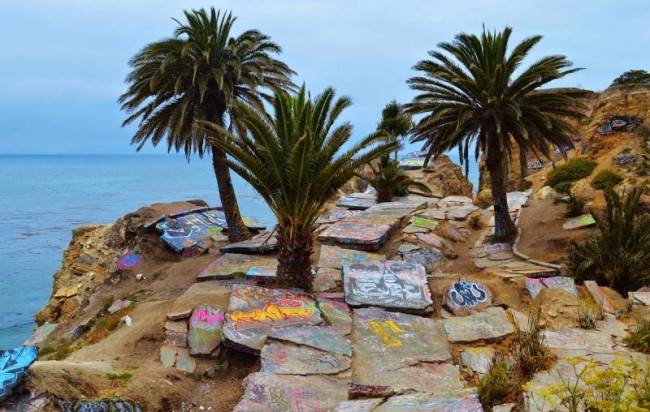 In the 1920s a housing development in San Pedro started sliding toward the ocean. The area was immediately evacuated and the houses were condemned. Most of the houses were removed, but a couple fell into the ocean. Graffiti-covered concrete slabs and pipes are all that remain from the old structures. The area, now known as The Sunken City, is reportedly still moving, but far slower than back when the hill began to move. Public access is illegal but many people visit every day. It’s a dangerous place where people have fallen down the cliffs to their deaths so we recommend just walking the trails to viewpoints around the perimeter. Point Fermin Park is adjacent to the park and has a lighthouse and outstanding views. The city of Los Angeles is discussing whether to open this unique place to the public. It’s hard to believe that concrete ships would ever make sense, but during World War I and II a small number were constructed. Most were eventually used as jetties and breakwaters or deliberately sunk in deeper waters. At Seacliff State Beach in Aptos you can still see one of them, the SS Palo Alto, which was beached in 1929 to be used as an entertainment venue. Today it can be seen up close from the end of a pier. Storms in 2016 and 2017 broke the ship apart, but it still remains. If you walk the beach below Fort Funston in San Francisco, you’ll find many concrete structures that are both military and utility in origin. Facing the ocean on one of the largest structures a gold painted sculpture of person with a dog’s head. Fort Funston has so many things to explore including Battery Davis on the bluff, some sand dunes, and the structures on the beach. At low tide a couple large mossy rings are exposed in the sand of Emma Wood State Beach in Ventura. These rings and the concrete chunks inside them are World War II military gun placements called Panama Mounts. The guns that once stood here had support arms that rotated on the steel rails that are cast into the concrete rings. Low tide in the winter is the best time to see these rings as storms remove the sand on the beach. On a flat spot above Mile Rock Beach in the Lands End area of San Francisco artists make unique shapes with colorful rocks. For many years it has been in the shape of a labyrinth. Walk in one side and try to find your way through the maze to exit on the other side. Kids love the labyrinth, but everyone will enjoy the spectacular view of the Golden Gate Bridge and the Marin Headlands from this spot. High above Gray Whale Cove State Beach on a point surrounded by steep cliffs you’ll spot a curious structure. From a distance it is hard to tell what the heck it is. If you decide to investigate, you’ll see that it is an old concrete World War II bunker that was exposed when the earth around it was excavated. At one point in time, this structure, nicknamed the “Devils Slide Bunker,” was hard to spot from planes and ships, but now that it is covered with bright graffiti it stands out like a sore thumb. To get to it, park at the trailhead for the Devils Slide Trail and walk south along the highway. Note that signs and fences may discourage access. The teetering structure and the steep cliffs are dangerous enough that you should probably just take pictures from the beach or the trail. 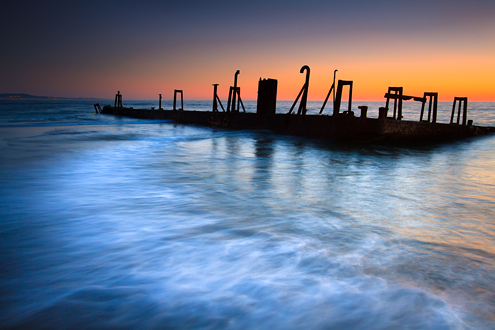 Head to Salinas River National Wildlife Refuge near the center of Monterey Bay and you’ll find one of the best-preserved shipwrecks in California. It’s a steel barge that hit the beach during a storm in 1983 and has remained in place ever since. Access to the shipwreck area is open during any tide, but if you wait until low tide, you’ll be able to investigate it up close.

See all the shipwrecks in California you can actually see.